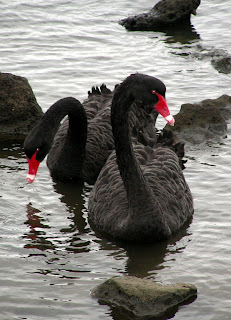 Yesterday was my first day of leave. I got up late, had breakfast (mushroom and goat's cheese omelette) at one of the local cafes and then went to Williamstown. I didn’t have much of a plan—I'm on holiday, after all—but I did remember to take my camera and binoculars with me.

Williamstown was just about deserted at 11 am on Monday. For a while, it was just me and the sea birds. Then some joggers turned up, followed by a couple of mums power-walking with three-wheeler prams and their kids cocooned in warm clothing. We all said good morning to each other in that polite way that I hope never goes out of fashion. 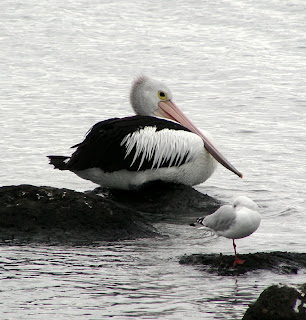 Despite the best attempts of the black swans to get their beaks on camera*, I managed to photograph some of the other local bird life. This pelican looked as if it were entirely fed up with the drizzle and the attention. (I'm still trying to work out how something without eyebrows can change expression.) It got bored with me after a while and went back to sleep. I'm sure it had a hot water bottle or two under its wings.

Further down the shore, about twenty little pied cormorants were perched in a row on the basalt boulders surrounded by a small flock of crested terns. By this time, the drizzle had turned to rain, so I got back into the car and headed for the nearest café for another coffee. Did I mention I was on holidays?
_____

* They're the equivalent of the kids who walk into shot on live broadcasts. I expect to download a set of photographs one day in which at least one frame features a swan carrying a sign that says Hi, Mum! and/or making rabbit ears behind an unsuspecting tern.
Posted by Snail at 9:02 pm

Love the photos. Every time I come back and look at your blog, I linger over those swans. That splash of colour that is the beak, and the more muted reflection of the beak in an otherwise almost monochrome photo... Ah, yes, I'm drooling. Geek girl is there!