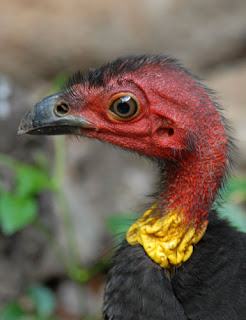 If there is a nuclear apocalypse, the cockroaches might very well inherit the earth. But they won't be on their own. They'll be sharing the cinders with brush turkeys*.

I've come to this conclusion after minutes many months of careful observation from my living room in the rainforest. Turkeys have excellent vision and hearing. Anything that sounds like a packet of biscuits being opened will draw them from miles around. They are inquisitive, treating the unfamiliar as though it were edible, which it often is to a turkey. And they will eat anything, including the cooling corpse of a tooth-billed bowerbird that flew into a window and a live skink that was trying to hide under my car. 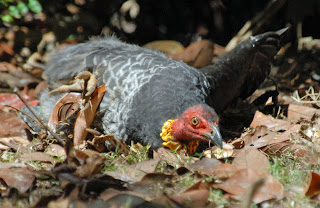 They doze on their backs ... (note the feet and the scalloped belly feathers) 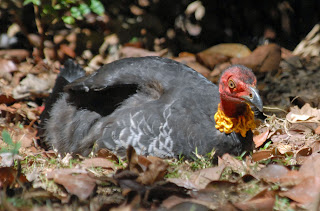 ... and look embarrassed when you catch them
They are resourceful, mugging pademelons for whatever fruit tidbit they are holding. (Spotted catbirds do the same thing — steal food from a paddie's paws — but they usually fly away immediately with their prize. Turkeys will often give the poor macropods a peck as well.) 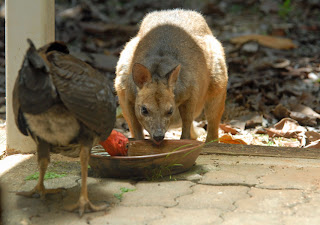 They turn up whenever the camera appears ... 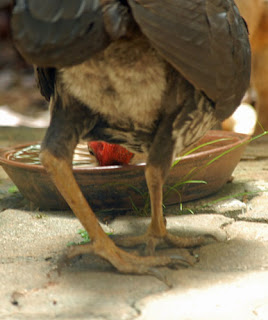 ... and walk right into shot no matter how tightly you frame the image
And they are persistent. A turkey will knock the lid off a dustbin more times than you can be bothered to put it back on. And as for picnic tables …

Listen and understand. That turkeynator is out there. It can't be bargained with. It can't be reasoned with. It doesn't feel pity or remorse or fear. And it absolutely will not stop, ever, until everything is eaten.

Well, you know what they say: the beak will inherit the earth.

*I am certain that somewhere there's a draft of Cormac McCarthy's 'The Road' with the words A truly chilling vision of the end of civilization. But. Needs moar turkeys scribbled in the margin.
Posted by Snail at 4:31 pm