Sometimes you're in the right place and the right time. And you're only a short walk away from your camera. That's not to say that the camera will have a fully-charged battery and is on the appropriate ISO setting. But let's not get too picky.

A few minutes ago, I wandered down the drive way to drop some recycling into the wheelie bin. As I was doing that, one of my neighbours came by on her late afternoon perambulation. We had a chat about the proposed development along the river. (We're agin it.) Then she continued on her walk and I headed back up the drive way.

You may recall that a dead tree fell across the drive way not long ago. It left a jagged stump about 4 m tall. Just as I was walking past this stump, a male riflebird decided that it was a perfect place for his display. Not at the top of a tall tree in the heart of the forest, but on a low stump about 6 m from the edge of my driveway. And I was there when he did his thing. How good is that? 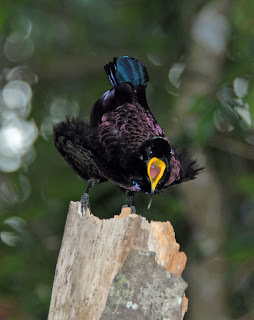 Are you looking at me?
The male spreads the feathers on his breast into a broad fan 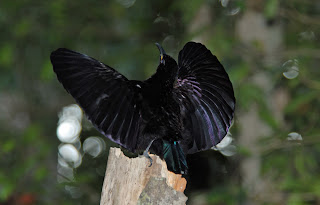 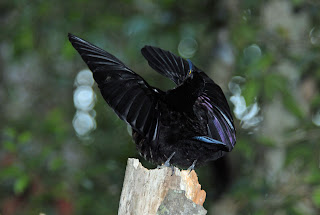 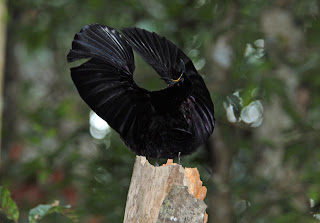 Let's go!
He extends his wings almost into a circle and throws his head back. Then he closes one wing and leans into the other. He alternates this pose in rapid succession. The images below, show him leaning into the left wing. 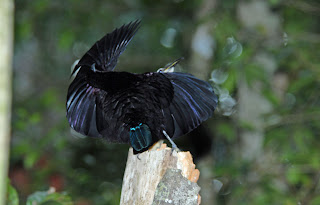 A female checks him out.
(You can see her beak over his shoulder.) 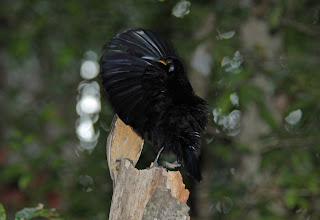 The study continues.
(Female, with buff-coloured underside, on the other side of the stump.)
Posted by Snail at 5:01 pm