How do you tell the difference between a goose, a duck and a swan? No, it’s not a joke, although one is forming in my mind as I type.

Let’s see. We could line ‘em up in order of size. Ducks are small, swans are big and geese are somewhere in the middle.

Or by plumage. Ducks are colourful, swans are white—or black or black and white—and geese are somewhere in the middle. 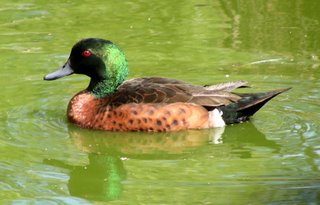 Hmmm. I thought I could see a pattern. But when I checked the most recent studies on the Anseriformes* (the group to which they all belong), the story wasn’t quite that simple. Ducks? Tick. Swans? Tick. Geese? Well, it seems that they’re what’s left over when the ducks and swans are taken out.

There are true geese, which belong to genera Anser and Branta. No one has a problem with those. There are true swans—Cygnus and their close relative Coscoroba of South America. And there are a dozen or so genera of true ducks. But that still leaves a bunch of others floating about without a neat … er … pigeon hole to roost in. 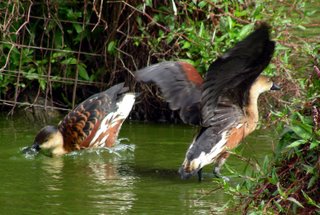 Among the orphans are the shelducks and sheldgeese. This group has long been recognised as an anomalous one, with features characteristic of both ducks and geese but fitting in with neither. Apart from the widespread Tadorna shelducks, the group includes Chloephaga sheldgeese from South America, African Alopochen 'geese' and others.

One classification treats the group as belonging with true ducks. Another puts it with the geese and swans. A third leaves it out on its own ...

Whistling-ducks (Dendrocygnus) are another enigmatic group. Although they are colourful birds that look a lot like ducks and walk a bit like ducks they just aren't ducky enough. Nor are they geese. Nor, despite the scientific name, are they tree-dwelling swans. Whistling-ducks are more or less out on their own in a lineage that diverged early on from the rest of the Anseriformes. 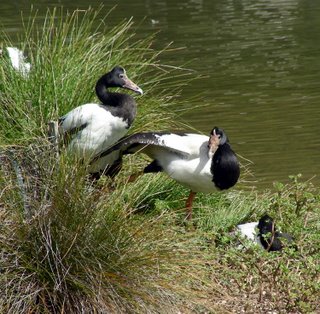 The magpie goose (Anseranas sempalmata) is another oddity. When Latham described it in 1798, he placed it in Anas, which at that time was a grab-bag for ducks. Lesson looked at it more critically and decided it was sufficiently different from other wildfowl to have its own genus. But he had a bet each way with Anseranas—Anser points towards goose and Anas towards duck.

In fact, it is closely related to neither. The magpie goose is descended from a lineage even older than that of whistling-ducks. Only one group of Anseriformes has a more ancient history—the South American screamers (Anhima, Chauna). (One classification places these spur-winged, webless water birds as sister group to the magpie goose.) 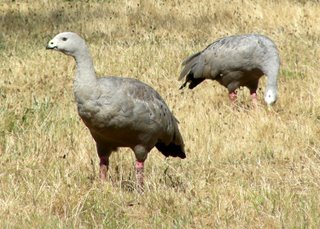 But there must be some Australian geese that really are geese in the Anser – Branta sense. Surely?

There's one. The Cape Barren goose (Cereopsis novaehollandiae of southern Australia is goose-ish. It doesn't snuggle up tightly with the true geese but it swans around with the right crowd.

* Which means 'goose-like'. Told you it was confusing.

This reader is so pleased that you did the Anseranas thang.
As Prof Sumner Miller would've said if he was a real scientist and not just a physicist: is it not a marvellous conundrum, this anseriformes 101? I don't find "why goose" difficult to think about.
When one looks at overall specialisation for herbivory, there's not a giant difference in each anatomical feature from ducks, but they're all greater than the sum of their parts. And it seems to me that, having gone along the vegetarian route the ancestor goose would have been able to exploit the further, drier edges of the water. And also the further, deepest reaches before darters and divers took over. So I see geese as the most specialised duck you can get. Sort of the opposite of that great cosmopolitan Anas, who will eat anything she can get down her gullet.
So, it's not difficult to think that goose has separated out from many duck lines.
Add the behavioural homologies that go with goose/herbivore, such as restricted breeding season and minimal sexual dimorphism, much more marked flocking behaviour on the ground, more territorial consciousness, then I think that although phylogeny is always the boss, it's never going to make a clear classification of goose for field stuff.

So, Pygmy Geese, Nettapus sp.? Why the problem. Not markedly sexually dimorphic, even though beautifully endowed with iridescent patterns; vegetarian on mainly waterlilies and other aquatic veg; territorial to a fault. But they are tiny and swim around in deep water most of the time and dive a lot. So they are called geese-like ducks. I reckon they are duck-like geese.

Your comments way back on the wood/maned ducks/geese (Chenonetta) made me think about the divide. Not too deeply, you understand. But you raised a really interesting point in an area about which I know ... well ... nothing. So it was fun to have a paddle around in the duck pond.

That paper I cited has summaries of several phylogenies based on morphology, DNA hybridisation and mtDNA. Unfortunately, I haven't got the original papers for those phylogenies, so I'll have to trust the authors. If I have some spare time, I might map diet and other characteristics onto the cladograms to get an idea of the patterns. (I need to see things to understand them.)

Ah, those beautiful little pocket pygmy-geese. They pop up in a few places.

With Muscovy ducks, comb ducks and Chenonetta among others (based on anatomy and behaviour)

The behavioural/diet mapping on to the c grams - I did a pretence of what that sounds to be a few years back when cladograms were the new thang and had confused duckies for me again… I got stonkered by the tertiary larnin' shortage around my brain, but I'd really like to see a real ecologist do it. Sociobiology (hiss boo) might have left not much of a nice smell in most places, but behaviours can't all be discounted, shirley.

Maybe when you've published your book. Or could a student do a project like that?

'Ere, who are you callin' an ecologist?

It shouldn't be that difficult—in theory. The cladograms are available, as is the behavioural information. So mapping one onto the other would be straightforward. What'd be even more interesting is to whack all the behavioural data into a phylogenetic analysis and see what it spits out. Not that it would be a terrifically robust result because total evidence is better than relying on one data set. But that's no reason to let the opportunity slip past.

I must get hold of the original works, especially those that talk about behavioural. Only problem is, I'm not sure if I'm brave enough to deal with out interlibrary loan system again. Not after they e-mailed me five cover sheets in lieu of a paper I requested. When I alerted them to this error, the ILL librarian apologised so much I thought she was planning to commit seppuku. Didn't get the paper, though.

'Ere, who are you callin' an ecologist?
Sorry, taxonomist, ma'am. I'm up past my end-of-screen time but have no excuse for such sloppy thinking.

I regret that I shan't be able to be online for a few weeks - a big diversification project on the ground as well as a bit of future-proofing is leaving us without connection to the state grid for a while.
I might have mucked around with temporary lines and transformers if I was really dependent on internet access, but as things stand I prefer minimal ground disturbance over being able to turn a crt on whenever.
The grandkids are coming to stay during the same period and there is a lot of anticipation from them about experiencing what great grandpa's life was like in the twenties and thirties.

We shall see how the coolgardie safe stacks up when the kids have to look after it ;-)

I've enjoyed reading this blog. You're a most entertaining memoirist. Is that a proper occupation description, I wonder.

Good luck with it all. I'll see you around the traps!