As adults, freshwater mussels sit in the mud and that's about it. It's not a bad life, I suppose, for a mollusc. (It's not a bad life for a human, now I come to think of it.) But there is a problem with a sedentary existence. If no one moves anywhere, the place is going to get overcrowded very quickly. So even stick-in-the-mud bivalves have to disperse.

As adults aren't going to move much, dispersal is down to the larval stages. Most freshwater mussels have a specialised larva called a glochidium that moves around by hitching a ride on a fish. But glochidia don't swim very well, so to increase the chances of the larvae getting a lift, the adult mussels lure fish closer ...

How does a bivalve entice a fish? The same way that a plant brings in a pollinator. It offers something the fish wants—either food or a mate. And this is where it gets weird.

Mussel shells look like mussel shells. They're stuck with that. But the mantle—the folds of tissue that surround the animal's body­—can vary in colour and shape. Mussels can also flap the mantle to mimic the movements of another fish or wriggle it like a worm. What fish could resist? And when it comes closer, the glochidia latch on and hitch a ride. 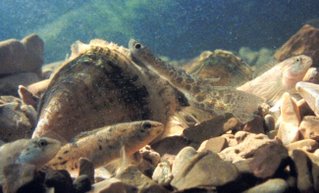 So how good is this mimicry? That was Lampsilis reevesiana looking so much like a small fish in trouble that the predators are heading in for a good feed. If you're not convinced, here's an animated gif. Videos are available here.

The rainbow shell Villosa iris resembles a crayfish right down to the movements. Check out the video. 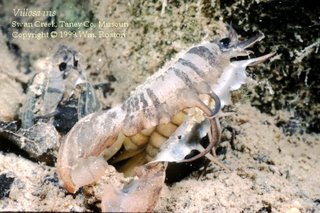 And what do you think these are? Larval fish, right? Well, no. They're the egg sacs of the Ouachita kidneyshell Ptychobranchus occidentalis. 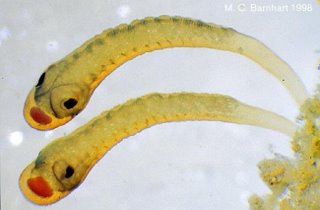 Look, I could show you pictures of these all night. But have a look for yourself at the Missouri State University's Unionidae site put together by Chris Barnhart.

Not bad, eh? They do all sorts of wonderful things. That Unio site is packed with pictures and videos.

I wonder if our few unionids do the same?

This item gets the big WOW from the both of us here, amazing nature!

Aha! Well spotted. That was for the readers who are fluent in pidgin!

A long and tiring day with a sick kiddo, then a read of your blog and *voila* ... enough energy to not only smile, but realise that an hour ago I couldnt have mustered it ... isn't it terrific how something interesting generates energy?
Thanks yet again.
:)

I'm glad you enjoyed it. Who says bivalves are boring?

Westralunio carteri larvae are reported to hitch rides on the local marron in the river.
Are they unionids?

I was a bit previous referring to our ones as unionids. They're actually hyridiids but they're in the same lineage so that's close enough for me.