A wonderful bird is the pelican ...

King and Queen of the Pelicans we;
No other Birds so grand we see!
None but we have feet like fins!
With lovely leathery throats and chins!
Ploffskin, Pluffskin, Pelican jee!
We think no Birds so happy as we!
Plumpskin, Ploshkin, Pelican jill!
We think so then, and we thought so still! 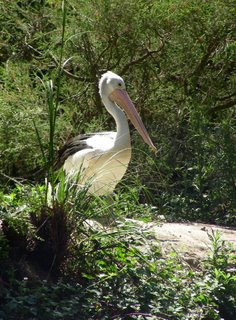 I'm siding with Lear on this one. Few birds—if any—are quite as grand as pelicans*. Even the fashionably unkempt brown pelican (Pelecanus occidentalis) of the Americas has a certain style about it, although it's nowhere near as imposing as its gleaming compatriot, the American white pelican (P. erythrorhynchos). Somewhere high up on the scale of grandness is the Australian pelican (P. conspicillatus). Dressed for dinner in black and white, it is a common sight in bays and harbours all around the coast. Its range extends into New Guinea and as far east as Bali and Sulawesi. It doesn't occur in the rest of Asia, except as a vagrant, which is a little baffling, considering the birds' ability to fly great distances and the extent of suitable coastal habitat. Maybe they're just not that adventurous.

Given their size and spectacular form, it's no surprise that pelicans have featured in myths and legends. Pliny commented on the bird's capacious beak and belly in his Natural History.

The pelican is similar in appearance to the swan, and it would be thought that there was no difference between them whatever, were it not for the fact that under the throat there is a sort of second crop, as it were. It is in this that the everinsatiate animal stows everything away, so much so, that the capacity of this pouch is quite astonishing. After having finished its search for prey, it discharges bit by bit what it has thus stowed away, and reconveys it by a sort of ruminating process into its real stomach.

As he had an eye for tabloid tales, he would have loved this park-dwelling, pigeon-eating pelican of London. (Not for those of delicate sensibilities.)

Some time between Pliny and the Middle Ages, the pelican underwent a makeover from ravenous diner to motherly martyr. The bird became a symbol of self-sacrifice—when the mother pelican is overcome with remorse at having killed her chicks in anger, she revives them with her own blood. As a symbol, it's lacking some logic. Still, with attention focussed on the noble surrender, no one seems worried about the multiple infanticide. 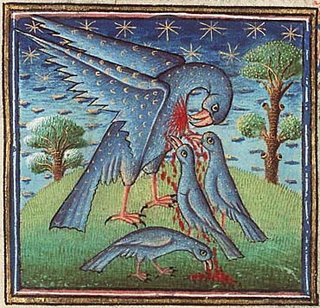 Except for Shakespeare who gave the morality tale an ironic twist when he worked it into Hamlet. On hearing of his father's death, Laertes, the fall guy, announces that he will exact revenge on his enemies but ....

To his good friends thus wide I’ll ope my arms;
And like the kind life-rendering pelican,
Repast them with my blood.

He got that right.

*I'm not so sure about their apparent jollity
Posted by Snail at 7:38 pm