Goose on the loose 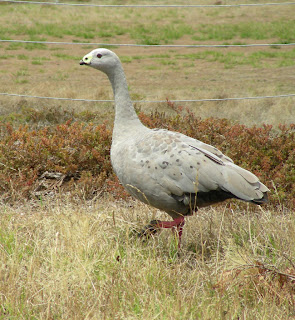 Spotted today out near Little River* in Mad Max country. This goose wasn't thundering around the place on a police motorbike but it did tell me to move along when I started to take photos from the car.

Cape Barren geese were once abundant in coastal southern Australia. Hunting reduced their numbers to a dangerously low level but they are now protected. Captive breeding programs have secured the species. There are hotspots in Tasmania, South Australia and Victoria. Serendip Sanctuary bred CBG until the mid-1980s. Since then, the birds have taken care of themselves. 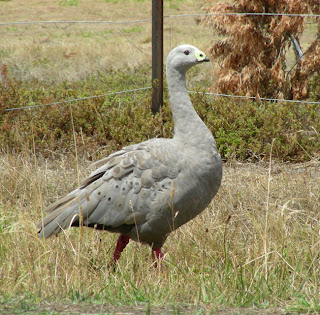 They turn up all over the Little River – Lara area, usually in small flocks on the lawns of the faux homesteads on acreage subdivisions. But lawns provide lean pickings in a drought. The verge is a more promising source of grass.

When I pulled over to take photos, the goose posed for a short while. Then it stretched out its neck and gave the grunting call that has earned the species the alternative common name of pig goose. Not an attractive moniker but an appropriate one. 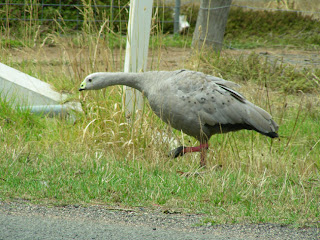 I left the bird to its roadside picnic. I hope it had a more modest sense of adventure that Max Rockatansky's pal.

*Yep. That's right. The band named themselves after the river.
Posted by Snail at 3:34 pm