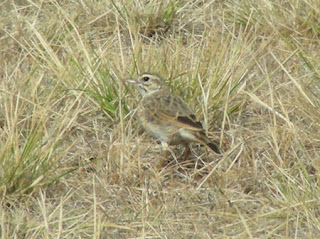 I can't tell one little brown bird from another. Well, I can distinguish a house sparrow from a tree sparrow but, as we only get the first around here, that's not a very useful skill*. And Richard's pipits. I can now recognize that species, thanks to Duncan. Oh, and spice finches. I managed to identify a bunch of those in my garden in Townsville, mostly on the way they were behaving. Hopping up and down as if they were on a trampoline. Strange little things.

But apart from sparrows, pipits and finches, little BBs are a closed field guide to me. 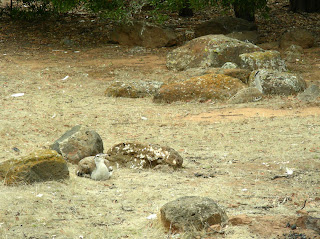 Large BBs, on the other hand, are dead easy. As long as I can see them. Despite their size, this pair of large BBs did an excellent job of being inconspicuous. Had they not been enclosed by a fence, I might not have noticed them at all. I may be the world's second worst birdwatcher but I know that a chain link fence means something important. I pick up on clues like that.

These are Australian bustards (Ardeotis australis), those big, beautiful but unfortunately declining birds of the open plains. I'd like to say that I saw these individuals in the wild but they're at Serendip Sanctuary, SW of Melbourne. I've only seen this species in the bush on one occasion—at Fossilbrook in North Queensland. (I mentioned it in an earlier post about bustards.) I'm hoping to see them when I visit that way again in the middle of this year. But I won't hold my breath. 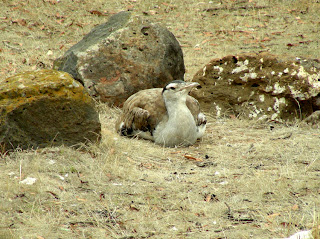 I passed the five hundred mark with a group of four stately Australian bustards. It was nice to have these big turkey-like birds as the milestone bird. At the time of European settlement I could have got them on the outskirts of Melbourne but these slow-moving creatures apparently taste delicious and were quickly shot out. Even in these remote areas where their habitat hasn't gone under the plough, they make a nice meal for the locals, who can easily pick them off from the back of a four-wheel drive. They are now only commonly found in conservation zones and in fact the birds I saw were within the borders of a national park. 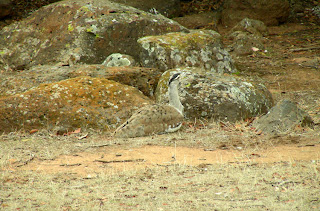 Bustards persisted for some time around Melbourne before people, agriculture and foxes got the better of them. While exploring the lands around Port Phillip Bay, John Lort Stokes (HMS Beagle, 1837 – 43) spotted 'several large bustards resembling a light brown domestic turkey' on the plains below Station Peak, close to what is now the site of Serendip Sanctuary. They were still abundant enough then that they received nothing more than a casual note in his records.

But the population plummeted after 1870. Less than a century later, bustards were thought to be extinct in Victoria. Today, they are known to occur in very low densities in a couple of areas in the NW of the state. In other parts of Australia, they are faring better but are nowhere abundant. 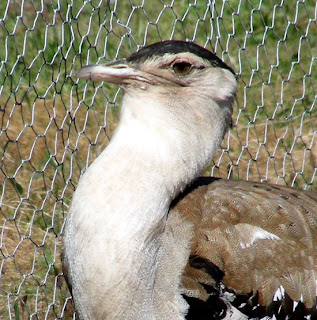 The Victorian Government's Department of Sustainability and Environment has reduced its support for captive breeding and increased its effort to maintain the species in the wild (PDF). It would be nice to think that one day even the world's second worst birdwatcher might be able to see these large brown birds in the wild without having to travel half way across the continent.
_____

* There's always the possibility that tree sparrows are, in fact, as common as rats and I've over-estimated my ability to identify them.

** The book documents his bid to break the Australian record of 700 birds in a year. He started on Jan 1st with a sooty owl (Tyto tenebricosa) in Gembrook, Victoria, and ended on Dec 30th with number 703, a little bittern (Ixobrychus minutus) at Sherwood, Qld.
Posted by Snail at 11:02 pm