In the breeding season, royal spoonbills (Platalea regia) sport manes of long white plumes and look very regal indeed. Over winter, when there's no need to show off to potential mates, they are less ostentatious. But they are still spectacular birds with their startling white feathers and eyes like cabochon garnets set in gold. 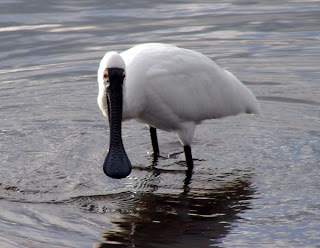 This spoonbill was feeding in the shallow water at Williamstown, completely oblivious to its audience (me) watching from a few metres away. (Quite unlike the flock of about 200 little black cormorants that took off as I approached. Now that's a sight.) Whereas many large wading birds are visual predators, spoonbills are tactile feeders. They don't look for their prey — shrimps and fish — but feel for it in the murky water. 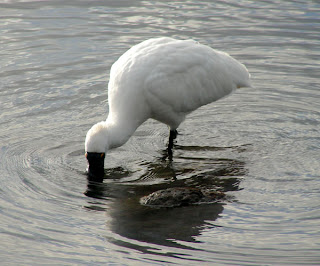 The inside of a spoonbill's spoon bill is lined with a multitude of fine parallel ridges that run longitudinally from the expanded tip to the narrowest section. The ridges are less than 0.5 mm high and between 0.3 and 1 mm apart. Between them lie pits, which probably contain sensory receptors. The rest of the bill is dotted with a double row of small, hard tubercles. 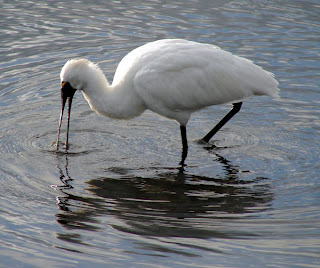 Swennen and Yu, who studied the black-faced spoonbill (P. minor) of Asia, suggest that the ridges serve double duty, first detecting prey during the side-to-side sweeps through the water and then trapping it. The tubercles may hold onto the prey as it is tossed back towards the throat.

Foraging spoonbills are models of time management. About 65% of their sweeps through the water result in something to eat. Swennen and Yu recorded the items collected by the birds during feeding and calculated that (on average) 10 minutes of work netted just over 45 small items and 1 large one. If they don't find anything within that period, they often give up and move on.

Next time I see a spoonbill, I'll get the stopwatch out and see how the regal version compares to the common herd.

(Oh, and just for the sake of completeness here's Australia's other species of spoonbill, the yellow-billed spoonbill, P. flavipes. I took this shot at Healesville Sanctuary.) 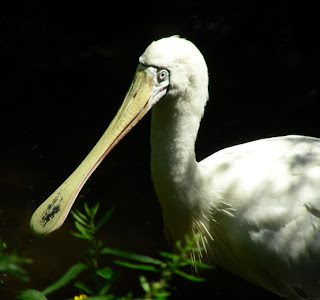