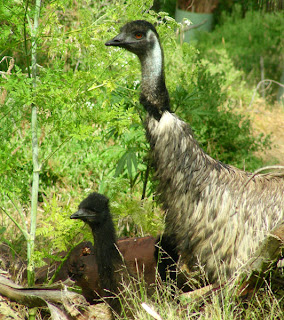 Rod Hull gave emus a bad name. Not that they are the epitome of virtue, well mannered and considerate. But they hardly ever attack people. If put on stage with Michael Parkinson, a real emu would probably not wrestle him to the floor. I say probably. I'm not 100% certain. There is something a bit unhinged about them.

On encountering humans, wild emus usually make a break for it. On one trip to central Queensland, I stopped the car to take a photo of some roadside vegetation, not paying any attention to the straw piles until they leapt up and ran. An emu can belt along at a top speed of close to 50km/hr. This group merely jogged, confident that they didn't have to put too much effort into their escape. 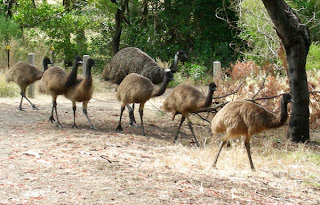 But emus that are used to humans are a different story. If they expect to be fed, they can be a problem. And by problem, I mean imagine what it's like to confront a 2m tall, single-minded, feathered dinosaur descendant fixated on having takeaway for lunch. Last time I visited Tower Hill Reserve, a friend made the mistake of pointing to an emu while holding a sandwich. The bird then chased her around the car. Much hilarity ensued. All it needed was the Benny Hill theme. 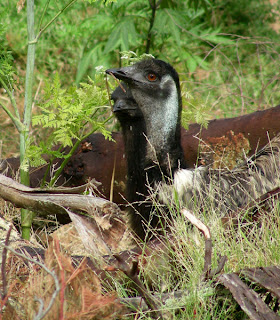 But this time, the birds were more refined. Dad brought his family of (surprisingly well-behaved) teenagers to feed on kangaroo apple. The chicks were unconcerned by the attention but the solo parent was a little more cautious. (As with other ratites, male emus take care of the offspring.) I'm not sure how old these chicks were but they stick with dad for the first six months or so. Then he boots them out. 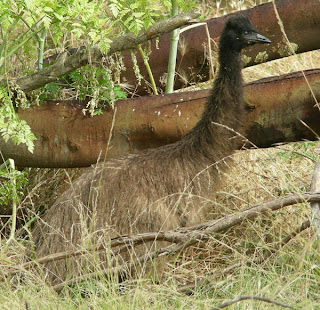 Yes, the Tower Hill emus are used to humans but that doesn't make it any less of a joy to see them. Not only are they extraordinary birds but it's becoming increasingly difficult to find a spot where you can guarantee a sighting, especially close to coast. Although emus are widespread across mainland Australia, they are nomadic. Their roaming and roving combined with a population that goes up or down in response to conditions means they can be difficult to census. The good news is that the emu is secure — it's unlikely to go the way of the Tasmanian subspecies or the Kangaroo Island and King Island species, all of which became extinct between the 1820s and 1850s.
Posted by Snail at 6:37 pm