Opisthostoma and the mad woman's knitting

Considering that this is supposed to be a snaily blog, it's been lamentably light on molluscs recently. Here's the first step to redress that deficit. 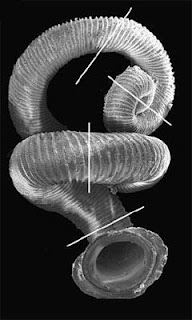 A couple of weeks ago, I posted this pic of Opisthostoma vermiculum, a recently described diplommatinid land snail from Gunung Rapat in Perak, Malaysia. The paper appeared in Biology Letters, which is not known for its publication of single species descriptions. So why was this an exception?

Well, the snail is a bit odd. And by odd, I mean that it gets around in the most bizarre shell in the history of bizarre shells.

In order to understand just how strange this animal is, it helps to visualize how a snail shell forms. Essentially, it's a tube coiled around an axis. Well, it's a tube that increases in diameter from start to finish but the basic idea is there. One tube and one axis.

Each whorl (a complete turn) partly overlaps the previous one, attaching to it for increased strength. Depending on the thickness of the shell walls, the degree of overlap, the diameter and the external ornamentation, a shell can be a lightweight shield covering only the really important bits or a capacious and robust fortress that protects the animal against a range of predators. And that's why crabs have such strong claws …

But I digress. Back to Opisthostoma vermiculum, which doesn't have to worry about being eaten by a crab.

This snail has multiple coiling axes. To achieve that, the shell whorls detach and reattach all over the place. It's like the mad woman's knitting.

To be absolutely accurate, whorl detachment isn't that rare. Despite the mechanical advantage of attachment, successive whorls aren't always cemented to the previous ones. In some species, the last whorl is a little free and easy, projecting in a different direction. This is common in other species of Opisthostoma and in Urocoptidae. It also occurs in the pupillid Gyliotrachela.

In others — a very small number — more whorls are detached, allowing the shell to grow as a loose spiral. Once again, it occurs in Opisthostoma and Blaesospira, among others. In these cases, the shell coils around a single axis, either sticking to that plan or only departing from it in the last whorl. The marine worm shells (Vermetidae) take it to extremes. What starts as a normally-coiled shell in the juvenile stage gets peculiar very quickly, developing into an irregularly coiled adult shell that's all over the place. More knitting. But vermetids are sessile and don't have to move. They could have rotating radar dishes and a windmill attached to them and it wouldn't matter.

Opisthostoma vermiculum is different. It lives on land and is mobile (on a small scale, of course), so its shell has to be both strong and shaped to allow movement. Too much decoiling would create havoc for a terrestrial snail. Or so you might think.

The shell starts off in the usual fashion with overlapping whorls around a central axis. So far so good. But then the whorl detaches and follows a second axis, which is almost at right angles to the first. The shell spot welds itself onto an earlier whorl, presumably for structural strength, and then rotates around a third axis. Another spot weld and it finally circles a fourth before finish off with a fancy collar around the mouth of the shell. Reattachment at those two points occurs without the building guidelines normally associated with shell development.

The authors say that the "coiling strategy is not only puzzling from an evolutionary perspective, but also hitherto unknown among shelled gastropods."

Or, as J.B.S. Haldane would have said if he'd spent more time thinking about snails,