Colour plays multiple roles in animals. It can be used to signal or to conceal or even to do both, at different times or simultaneously. Colour is complex. Its properties depend on the light falling on it, so what looks like a beacon in the sunlight might disappear into the gloom of the forest. In water, the silvery sides of fish catch the sun then mirror the blueness around. And the duties of colour depend on the capabilities of the observer. Butterfly wings send signals in ultraviolet, invisible to humans but bright and clear to other insects. Bird feathers do the same. Those indistinguishable cryptic species? Not so cryptic to each other. Just because you can’t see it doesn’t mean it isn’t so. 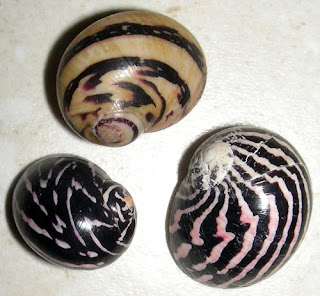 Although birds and butterflies are the obvious targets when studying colour, snails get a guernsey too. Nerites on tropical shores exhibit variation in shell colour that ranges from subtle to migraine- inducing. Black and white zigzags are frequent. Some species have red blotches. Others have intricate patterns of flames, lines and chevrons. Are they sending messages? Are they hiding from predators? Or is there another purpose to the markings?

Colour polymorphism occurs when a species comes in two or more distinct colour morphs. (You didn’t see that coming, did you?) The term usually applies to situations in which there is a clear break between one morph and another. They are nicely and neatly defined. This one goes here and that one goes over there. 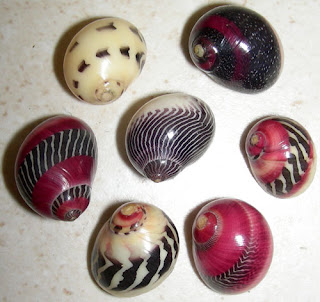 This isn’t the case with many nerites, though, where one pattern grades into another. You might be able to group them according to a general appearance (flames, zigzags, chevrons) but those patterns aren’t discrete. If you look at them closely, you can’t draw a boundary around them. That one goes here. Or is it here? Or there? Bugger this, I’ll have a beer. If this is the case, the species can be referred to as pseudopolymorphic.

Despite the abundance of colourful nerites on wonderful beaches around the world, the group has been mostly ignored. Maybe researchers have been working on their tans? I dunno. Only the small but perfectly formed and highly pseudopolymoprhic Clithon oualaniensis has been scrutinized in any major way.

Grüneberg studied the species in India, Sri Lanka, Hong Kong, Peninsular Malaysia, Singapore and Australia. He described the snails as having “the size and general shape … of a small pea”, which is about right. But that doesn’t give credit where it’s due. Clithon oualaniensis may be pea-like but it comes in such a variety of colours and patterns that each shell is as glorious as a Persian carpet. 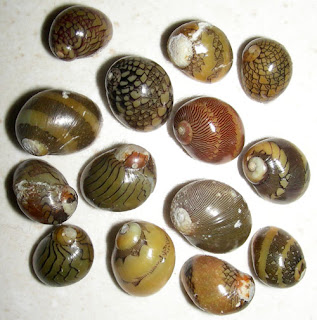 Grüneberg categorised the patterns, considering the interplay of axial markings (across the whorls), spiral markings (along the whorls) and the changes during growth. He ended up with 17 variants, including zebra (broad black stripes), tiger (narrow black stripes), large and giant tongues (don’t ask), ladders and a range of coloured spirals. Generally, the dominant patterns in the west differed from those in the east. There appeared to be a discontinuity across the Bay of Bengal. Why?

Earlier work by Neumann on the freshwater nerite Theodoxus fluviatilis demonstrated that environmental factors could have an impact on the shell pattern. In that species, adjustments in Ca/Mg ratio in the water led to changes in markings. Grüneberg wondered whether the influence of monsoon rains on water chemistry might have a similar effect on the tropical Clithon.

It was an interesting idea, but after examining the relationship between the distribution of variants and sea surface salinity, he rejected the apparent correlation as being of no significance. In his 1979 paper, he wrote, “We have, at present, no other hypotheses concerning Clithon polymorphism which could be put to the test.”

He went on to try to elucidate the scope of the problem: “Clearly, we are dealing with a very large-scale phenomenon, and presumably more than a single parameter is involved. Its very magnitude indicates that problem is essential oceanographic in nature, but it by no means clear from which sector(s) of this multi-disciplinary subject the answer will come.”

So where to next? Too big? Time to give up?

This vast geographical range of variation may be an artifact of collection rather than reality. Gardner and colleagues noted that Grüneberg collected material from a wide area but usually only picked up specimens from a single spot on the beach. They decided to examine Clithon variation on a much smaller scale — by working on populations on three different substrates at Dingo Beach and the adjacent Nellie and Champagne Bays, near Proserpine in Queensland.

What they found were significant differences between the frequencies of forms on different microhabitats at each location. At Dingo Beach, for example, green shells with dark patterns were much more abundant on sea grass than on shelly sand or rock and coral, whereas the shells with red, orange or purple ground occurred much less frequently on sea grass. Their results suggested that shell colour variation might have a role in camouflage.

That hypothesis remains untested but it is enticing. To this visual predator those marking disappear against an irregular background. The more closely the colours resemble those of the substrate the more difficult it is to spot the shells.

But if this is a matter of camouflage rather than, say, thermoregulation or a consequence of salinity, then which predators does it work against? Colour, after all, is complex. How do crabs perceive the shells? How do fish see them? Maybe if we look through their eyes we might see a completely different pattern?

I have been known to dabble in a bit of hypothesis testing wrt Nerites and microhabitat selection. Might need to think on this one and design a little expt for next time you are heading north - you could do some sampling on way up and we could handle data once you get here....?