Before 1896, when I had the opportunity of studying the fauna of Lake Tanganyika on the spot, it was known that there existed, in the so-called Sea of Ujiji, one animals, the affinities of which are undoubtedly marine. This was the medusa Limnocnida, which Dr. Boehm saw as he crossed the lake in 1883.

It was known further that the jelly-fish was associated in Tanganyika with a number of strange molluscan forms, for the empty shells of what appeared to be some six entirely new genera of gasteropods had been brought home by Captain Speke, Joseph Thompson, and Mr. Hore. As the animals contained in these shells have not hitherto been known, their classification by the conchologists with existing fresh-water types have always appeared extremely doubtful, and from the first Mr. Edgar Smith, who described the greater number of these forms, has held the opinions that they might eventually turn out to have the same oceanic characters as the jelly-fish. 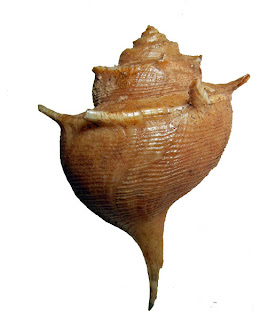 The similarity between the freshwater shells of Lake Tanganyika and those of tropical seas led Moore to speculate that the lake was an ancient remnant of Jurassic ocean, isolated and preserved in the heart of Africa. He was wrong — not only is the lake much younger (it probably had its origins in a series of swamps less than 12 million years ago) it formed in the depression of a tectonic rift. Lake Tanganyika's only connection to the ocean is the 4,700 km Congo River, which empties into the Atlantic. During the Mesozoic, its only connection was the much longer proto-Congo River, which is older than the Atlantic. So the geological evidence points at a more recent and entirely freshwater origin for these remarkable thalassoid (marine-like) snails.

The resemblance of the Lake Tanganyika Paludomidae to unrelated saltwater species is thought to the product of similar environmental pressures. Both marine and freshwater snails face predation from fish and crustaceans, which has resulted in an escalating arms race of defensive and offensive adaptations. Piercing teeth and crushing claws are met with spines, narrow apertures and thickened ridges on the shells. (And it's not confined to aquatic habitats. Some terrestrial species, such as Opisthostoma, resist attack in exactly the same way.) 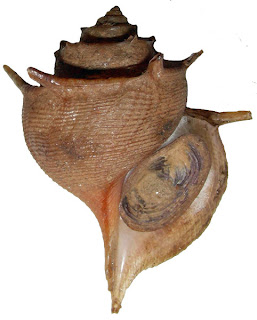 Tiphobia horei is one of the more elaborately ornamented snails. Named after missionary and explorer Edward Coode Hore, who mapped the lake in the late 1800s, this species occurs on soft substrates down to about 100 m. (When Moore collected snails at the turn of the 19th century, he brought up shells from 300 m but did not find live material at that depth.) The spines may serve double duty in not only protecting the snail from attack but also preventing it from sinking in mud. The spines of marine murexes are thought to do much the same. 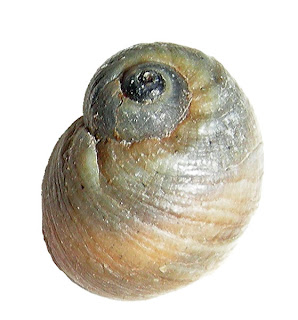 Spekia zonataIn contrast, the much smaller Spekia zonata** has a solid shell with a thickened lip that thwarts 'peeling'. (Peeling is a common technique employed by crabs when feeding on marine molluscs and lip strengthening is a standard countermeasure in the evolutionary war. It is particularly pronounced in the intertidal Neritidae, where internal ridges and teeth assist in buttressing the shell against attack.) 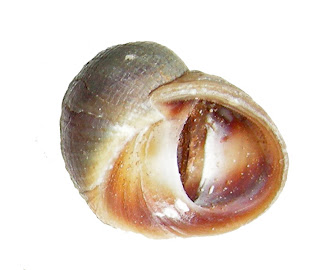 Spekia is armoured against many species of crab but the Lake Tanganyika endemic crab Platytelphusa armata is a mollusc specialist. Unlike its less fussy relatives, it has chunky dentition on its claws, which gives a good grip and increased crushing power. It doesn't waste time by trying to peel dinner — it mashes the mollusc. (That should bring joy to the hearts of crustacean fans in the Invertebrate Battle Royal.)

It is not surprising that Moore thought Lake Tanganyikan snails were land-locked relicts of an ancient sea. But the resemblance to marine species is a product of convergence, of similar environmental pressures resulting in similar solutions.

I am a slow learner.
I keep being astonished at how interesting you make snails.
:)
jj

Plenty of interesting stuff in the literature, jj!

(Note to self: I must take some better photos of those snails.)

I know ... it's just that I get spoon fed such intersting tidbits and they get me going again when I feel all "readinged out"

This is indeed fascinating.

I love this stuff.

This is very interesting. Perhaps preclusion of crawlout (see Covich) in deeper water bodies has something to do with ornate structural countermeasures against predation. Apparently some thinner-shelled Thiarid species like Melanoides tuberculata also occur in Tanganyika -- and hold up much more poorly against the resident durophagous crabs. This species has burrowing and prolific parthenogenesis in its favor, however.

Interesting. I'll have to ponder on this a bit more ...