For a couple of minutes yesterday, the garden erupted in ornithological pandemonium.

In the moments before, the Macleay's and Lewin's honeyeaters were shouldering each other away from the azaleas. (Even though there's enough for everyone.) A pair of spotted catbirds perched in a nearby tree, watching the dispute. Scrubfowl and turkeys scratched through the leaf litter. The usual scene. Not entirely peaceful, but Zen-like compared with what was about to happen.

Enter a whipbird, the most cartoonish of the forest birds. They look like the Roadrunner but have the demeanour of Looney Tunes Tasmanian Devil. This one had flushed a frog from the undergrowth and was determined to catch it at any cost. The bird came scooting out of the forest, chuckling and chattering as it chased the frog, which was making enormous leaps to escape. The parade zipped past my window. And then came back again. The circus was in town.

I grabbed the camera and did what I could. But whipbirds are very quick and somewhat unpredictable. I wonder if they know what they're going to do next. 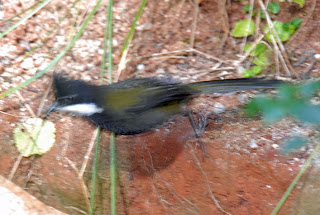 Usual view of a whipbird 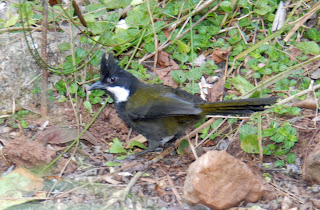 Caught in the open 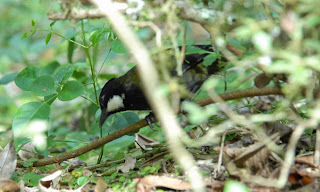 There must be some food somewhere
Posted by Snail at 4:59 pm

Great photos of the Whipbird Snail lucky to get it in the open.

It was so focussed on catching the frog that I don't think it noticed where it was!

It certainly did, Tony!

Pretty sure the frog got away, Dave. Didn't see the whipbird trying to swallow it, anyway.

Oh, I wish I had a video of the action. It was hilarious.

whipbirds are so noisy!

They're sure not subtle. This one was making all sorts of nutty noises as it chased the frog.

Judging by the numbers of calls and answers that I hear around the place, I think I've got three pairs on this property. Or one very fast-moving pair.

Great pics and story! Wish my backyard erupted like that!

Goodness Bronwen,
A photo of a Whipbird - well done indeed. I've rarely been able to get much of a sighting even through binoculars at distance.
Lovely story. I'm going to cogitate that over breakfast, thanks.
Gouldiae.

This one rummages through the Freycinetia in front of the house. You know when the bird's about because the plant shakes like crazy.