When the garden is full of accomplished singers, it's difficult to choose one that stands out. Grey fantails and bridled honeyeaters produce complicated melodies. Scrubwrens twitter* musically. Even the spotted catbirds have a charm of their own, with their yowls and miaows that sound as though they've been fed through a dalek's voice synthesizer. It's hard to pick one. But there's a new bird in the garden and he's made the contest more interesting. A tooth-billed bowerbird (Scenopoeetes dentirostris) has moved in. He's set up his display ground in forest a few metres from the house and several times a day, he perches on a liana and sings with great enthusiasm. Although a bowerbird, the male tooth-billed bowerbird doesn't build an elaborate bower. But he does clear a stage, which he decorates with leaves. Not just any leaves, you understand. He tosses away those that offend his bowerbirdy sensibilities and replaces them with beautiful ones, selected and snipped off the right plants. This bird is fond of gingers, which are abundant at the forest edge. He clips the leaves with his beak and carries them back to the display, where he arranges them in a precise pattern, always with the paler undersides turned up. I didn't want to disturb him too much as he went about decorating the stage, so I only took one photo of the site. But just after that, a female turned up to inspect his work. She didn't seem that impressed, but I'm sure she will change her mind as he adds to his leaf collection. 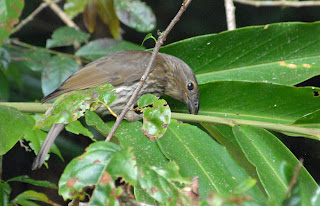 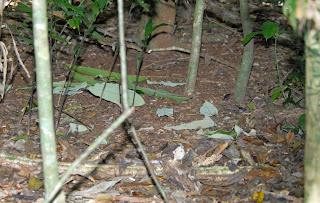 A work in progress: the ginger-leaf stage
____ * By pecking at the keyboard
Posted by Snail at 4:34 pm