Climbing up the walls

Recent rain seems to have driven most of the invertebrates under cover. During the hot weather, the moths, crickets and beetles were so thick on the windows that I thought I was going to have to get one of those magnetic aquarium glass cleaners so I could clear a little space to see through. But showers over the past few days have been heavy enough to send the insects into hiding, while still being too light to bring out the really fascinating invertebrates.

But I can wait.

There are some interesting animals around now. This opilionid (harvestman) was resting on the wall in the shade of the patio. I've seen a few since I've been here, but this was the first one at close to eye height. 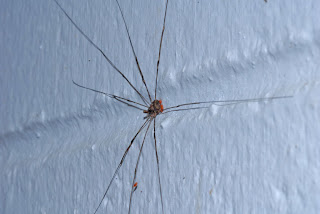 The abdomen was covered in a cluster of mites (the red blobs). A couple of mites were also attached to the legs. 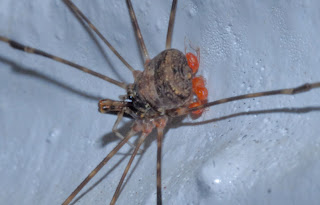 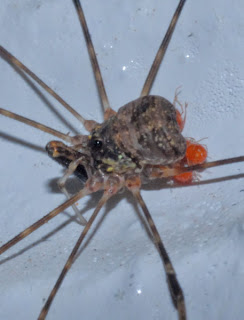 Mites are common ectoparasites (external parasites) on arachnids and insects. They also occur on millipedes — you can often see them scurrying along a millipede's sides — and some land snails and slugs. The mites living on terrestrial molluscs are the most intriguing. Of course.The best known belong to the genus Riccardoella. These mites occur in Australia, but only on introduced snails and slugs. They don't appear to have made the leap scuttle across to our native species, although R. limacum is known to occur on the New Zealand slug Athoracophorus bitentaculatus, a relative of the Australian red-triangle slug (Triboniophorus graeffei). If any of you in RT slug land want to take a close look at these marvellous molluscs to see whether they're carrying mites, I'd be interested in hearing your reports. Riccardoella is particularly fond on popping in and out of the pneumostome — the breathing pore — which is at the apex of the triangle, on the right. That's where you're most likely to spot them.