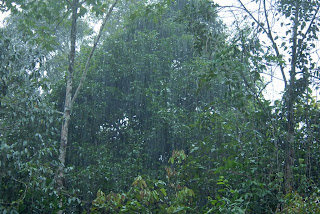 As the rain continues, all sorts of ground-dwelling invertebrates are taking advantage of the patio. The pademelons, who think they own the space, now have to share it with spiders, ants and beetles. 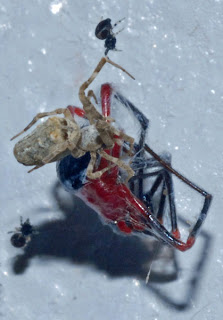 Over the past couple of weeks, I've seen several red-and-black spiders (Oncodamus decipiens) wandering across the bricks. This species occurs in rainforest along the east coast of Australia from the Hunter River region of New South Wales to north of Cairns in Far North Queensland. It is not a great web-builder. The roaming habit is shared with other members of the family (Nicodamidae) and is recorded in the name of the most well-known species in the group, Nicodamus peregrinus.

But these peregrinations can lead them into trouble. This one strolled too close to the web of another spider (a uloborid?) and ended up feeding both her and her spiderlings.

Nicodamidae is restricted to Australia, New Guinea and New Zealand. 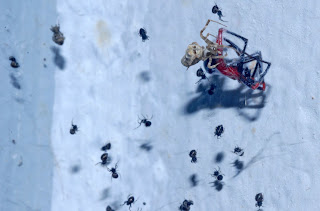