Autumn in the tropical rainforest is a the subtle transition from the Wet Season into the Slightly Drier Season. Days are mild and nights are deliciously cool. It won't be long before I will have to drag out the sheepskin slippers (checking them first for spiders and centipedes before I put them on.) And after that a jumper and beanie and fingerless gloves. Try not to picture the scene.

The change in season is also marked by a decline in the butterfly population. The brightly coloured swallowtails have gone. If they have any sense, they will be heading down the mountain towards the coast, where the temperature is still relatively high. Otherwise it's three pairs of slippers, a jumper and very small beanie for each of them too. Maybe a flannel shirt too, given that we're in the country.

Before they disappeared, the butterflies went through a flurry of egg-laying. While this blue triangle (Graphium sarpedon) was laying her eggs, a couple of small green-banded blues (Psychonotis caelius) fluttered around her. I'm not sure what set them off — perhaps they regarded her as a competitor for ovipositing sites, because her preferred plant was next to theirs. And being coloured blue is just asking for trouble.

I had planned to colect some eggs to raise the caterpillars, but most of them did not last long, probably picked off by the gangs of scrubwrens that forage in the garden each afternoon. I should have been faster. Maybe next year. 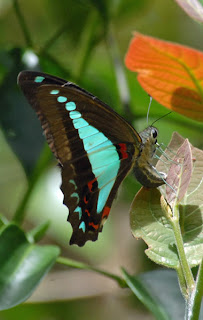 Female blue triangle ovipositing on host plant. Neither picture
nor common name does justice to these exquisite butterflies. 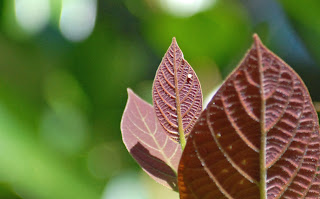 Blue triangle egg. It was gone in minutes. 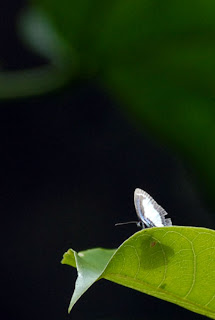 Green-banded blue having a short rest before resuming
its frantic fluttering around the blue triangle.
Posted by Snail at 1:04 pm