A tale of two snails


On 25 January, we received about 50 mm of the rain — the first and perhaps only decent fall the month. The rain brought out a host of tiny snails that grazed the wild gingers. I took a heap of pictures, hoping that some would be in focus. When I looked at them on the big monitor, I saw that I had photographed not one but two species belonging to two completely different groups.


In ye olden days — well, until the 1990s — gastropods were divided into three major subclasses: Prosobranchia (operculate snails), Opisthobranchia (sea slugs) and Pulmonata (air-breathing snails). This was nice and neat and made cataloguing easy, but it was also inaccurate. It bundled together species on the basis of overall appearance and with little regard to their evolutionary relationships. Since the 1990s, gastropod classification has undergone major changes. Don’t make me go through them. To quote Danny Glover in each increasingly dubious iteration of Lethal Weapon*, ‘I’m too old for this shit’. But it might be enough to know that Opisthobranchia and Pulmonata have emerged more or less intact, whereas Prosobranchia has been cut up into numerous lineages that are still under discussion. 'Prosobranch' taxonomy is strange and frightening and I'll have no truck with it.

This first species I photographed is a pulmonate snail. Most land snails and all land slugs commonly encountered belong to Pulmonata, so that’s an easy call. In this case, the main clue is the number of tentacles (four) and the position of the eyes (at the tips). (There are other clues, such as the presence of a respiratory pore or pneumostome, but that is not visible in these photos.) 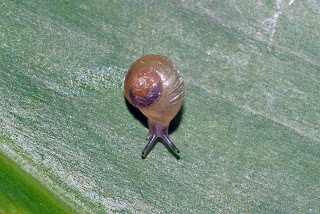 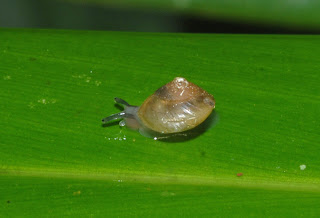 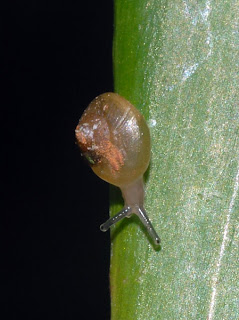 Note that this doesn’t work with all pulmonates, but it’s a handy pointer. Best not to apply it to aquatic snails and those in marginal habitats (reed beds, marshes, mangroves, etc) or it’ll all end in tears. Mark my words. Stick with gardens, forests and deserts.

(By the way, I’m not at all sure of the lower level identification of this species. I think it is somewhere in the Euconulidae – Helicarionidae – general Limacoidea bag, but molluscs smaller than 10 mm across remain a mystery to me.)

But not every land snails is a pulmonate. In the humid tropics (and even parts of the temperate zone, such as SW England), some land snails belong to different lineages. Back in those golden days of tripartite classification, they were placed in the Prosobranchia. Now Prosobranchia is no longer a valid group and they are in Neritimorpha and Caenogastropoda. (An outline of Bouchet and Rocroi’s (2005) classification is here Good luck.)

So what’s a quick way of distinguishing a non-pulmonate land snail from a pulmonate one? Tentacles and eyes again. This non-pulmonate snail (Pleuropoma sp., Neritimorpha) has only one pair of tentacles (vs two pairs) with the eyes at the base (vs at the tips). Once again, this is not infallible, but it’s a start. The presence of an operculum — the calcareous or chitinous ‘door’— that seals off the shell when the snails wants to get some shut eye withdraws is another useful indicator. 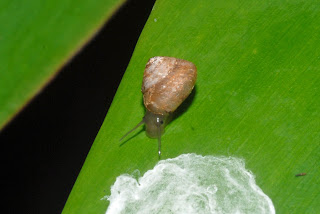 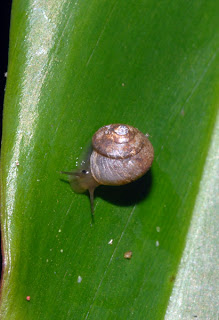 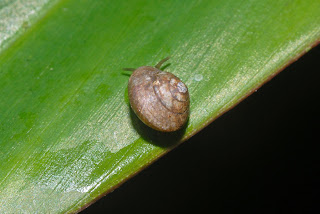 * Lethal Weapon 2...seriously...how long did it take them to make the connection between the people with South African accents and the car boot full of krugerrands? Er...or so I’ve been told.
Posted by Snail at 6:00 pm

you KNOW your snails!
they look so TINY...is a magnifying glass needed for clasification purposes?
i wonder what's going through that teeny weeny snail brain as you're examining him...is HE classifying you?

I did know my snails. I think I've forgotten most of it.

For many snails, you can get away without a magnifying glass and get an ID from the macroscopic features of the shell. But if that's no good, it's microscope + dissecting kit. A lot of snail taxonomy involves looking at the bits on the inside --- mostly the reproductive tract. That's my PhD thesis right there!

I'm not sure what any of those snails were contemplating. None of them withdrew into their shells, so they might not have been that bothered by the attention.

Did you spot the cricket in the water drop pic?