A friend sent me a series of text messages last night. He was spotlighting for wolf spiders on remnant grassland in Melbourne's west but was having no luck. What the area lacked in lycosids it made up with vertebrates. The first message mentioned a striped legless lizard (Delma impar). The next few, owls and nightjars.

So I went out into the back garden (which is overrun with wolf spiders) and did some spotlighting of my own. Never mind that I didn't have a spot light. A minor detail. I was on a mission to locate and identify leopard slugs and picking them up by the glint of mucus in moonlight would have to do.

I saw the first slug on the compost heap but its head and part of the mantle were buried in cereal. I photographed it for the record and then moved on. The second was in the bird bath (above). This one had clear and distinctive markings. The configuration of black dots at the posterior margin of the mantle matched those of a slug I'd photographed the night before (below). I'm pretty sure that the same slug was back for its evening paddle.

But the slug was showing signs of having recently indulged in more than a paddle. That pale projection on the right side of its head is its penis in the last stages of retraction. (No wonder the birds give the bath a miss.)

And then I noticed a couple more leopard slugs. They didn’t bother to climb up a tall object but engaged in their mid-air activity* from the rim of a plant pot.

The pictures tell the story. (I just wish the slugs had done it against a better backdrop than mulch made from old copies of the Age.) 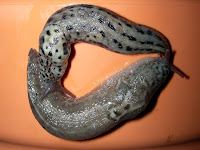 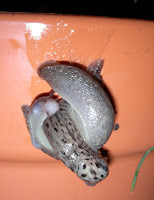 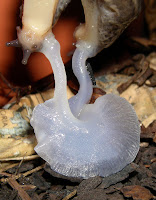 Wow, cool! as soon as it gets warm enough I'm going out at night. what time was did you go out? how long did they last?

Lucky you! I have not yet had a chance to witness Limax mate.

TAW, it was about 11.30 pm. Once they'd established contact (presumably by following mucus trails), mating lasted about 20 minutes.

Spotting them really was a matter of luck. It's amazing what wonders you can see in your own back garden!

I don't call them that within earshot, you understand.

Of course, as they're hermaphrodites* I should have called them both Ralph-and-Lisa. Or possibly Lisa-and-Ralph.

*The slugs, that is.

This almost maxes out my gross tolerance for the day. I posted today about a different kind of slime in case you haven't spent enough time watching slugs copulating this week. I keep thinking "What if I had stepped on a copulating slug pair with bare feet?" No, the slugs didn't have the bare feet.
And your buddies want to join you watching them? What kind of preverts are you Aussie scientists?
Of course part of my PhD was spent watching yeast reproduce. Now talk about exciting material. . . .

I happened upon two slugs in the very act one evening while I was out in my backyard. I didn't have to wonder too hard about what was going on. It is God, not evolution, who is the awesome creator of such things.