Look, I know that we make a big thing about our dangerous wildlife — spiders, snakes, blue-rings, box jellies and now sea lions — but birds don't usually appear on that list. They're rather benign.

Okay, the magpies get pretty thuggish when it's breeding season but who can blame them? And the masked lapwings also get in a snit if you approach too closely when they've got chicks. And then there was the recent incident where a couple of wedge-tailed eagles decided to see off an intruder — a paragliding enthusiast whose canopy they attacked with their massive talons.

Still, if we forget the magpies, lapwings and eagles, the rest of the avifauna is benign not malevolent.

Right. Until you fire up the barbecue or break open the picnic hamper.

If you're down by the beach, silver gulls cause the most havoc. No surprise there. After all, gulls are the street urchins of the bird world.

In city parks, white ibis mug small children for their sandwiches. They're experts at intimidating toddlers, being about the same height but armed with a long curved beak and an inscrutable stare. And they're quick. One moment your sandwich is in your hand, the next it's clamped in a beak with a grip like a pair of surgical forceps. No wonder white ibis are increasing in urban areas. They'll be muscling out the silver gulls next.

Brush turkeys are the picnic nickers par excellence of the east coast. They may not look terribly bright with their Stan Laurel 'hair' and banana-yellow wattles but they are as cunning as a shit outhouse rat. They're persistent — extraordinarily persistent — testing the defences repeatedly until they find a weakness. They're also expert at being decoys. One individual will distract you while the others leap onto the table. You might have enough time to mutter something about how clever they are before your picnic is ripped to pieces ... Remember the velociraptors in Jurassic Park? When Sam Neill referred to turkeys, he wasn't talking about Christmas lunch.

But even brush turkeys are rank amateurs next to emus. Never mind that they've been given some veneer of respectability by appearing on the Commonwealth's coat of arms. Emus are mad. They're the product of a Dr Moreau-type cross between Yogi Bear and Norman Bates. If you're having a meal outdoors in emu country, whatever you do, don't follow the example of a friend of mine. 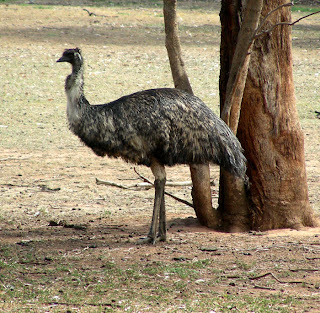 We'd been for a walk at Tower Hill in SW Victoria. On returning to the car, we broke out the thermos and esky to have a cup of coffee and a sanger before heading off to the next destination.

My friend gestured at an emu. Why he felt the need to gesture, I have no idea. I'm not the most observant of people but even I couldn't miss the two-legged, crane-necked, shaggy-feathered mobile mountain of a bird heading towards us.

His mistake? He gestured with a sandwich in his hand. The bird saw the sandwich. As it chased him (and the sandwich) around the car all we needed was the Benny Hill theme to complete the scene.

Emus are good. Very good. But they're not too subtle. The perfect barbecue burglars are kookaburras.

It's a lovely autumn day. The sky is blue, a light breeze is stirring the crowns of the gum trees. The sausages are sizzling away on the hot plate. They're almost done. Just time to open another beer before they'e ready. Mmmm. They're looking good. 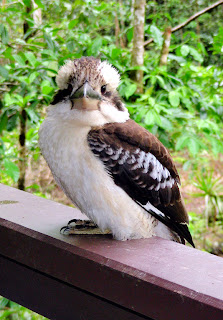 And then there's a rustle on a nearby branch. A shadow falls across the barbecue. Before you can react, a kookaburra swoops down and snatches a sausage from the hot plate. Right in front of you. The very one you've had your eye on for ages. The one that you've been waiting to stick inna bun with a dollop of coleslaw or sauerkraut or cheese or sauce. (Or all of them. It's a barbecue, after all.)

The kookaburra returns to its perch and beats the hell out of the sausage by smacking it against the branch, as if it were a snake. Or maybe it’s a novel way of letting the sausage cool ... No wonder kookaburras laugh. They've got us well-trained.
Posted by Snail at 2:30 pm

The sometimes amusing and bizarre antics and behaviour of birds is most entertaining - unless one has been the victim of such behaviour.

For my twist on this topic read

It's always fun until someone loses an eye!

I can't remember where this occurred but I do recall seeing a timid tourist being bailed up by a gang of pelicans who were expecting a hand out. I felt some sort of obligation to rescue her. No idea why. So I led the way through the the pelican posse. It was really quite intimidating. They are Very Large Birds. Next time I'm looking in the other direction.

Does that make you a "chicken"?